Use Cases and Demo

Docker allows you to package an application with all of its dependencies into a standardized unit ... that contains everything it needs to run: code, runtime, system tools, system libraries ... This guarantees that it will always run the same, regardless of the environment
From docker.com

Virtual machines include the application, the necessary binaries and libraries and an entire guest operating system - which may be tens of GBs in size. 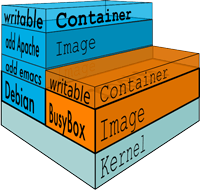 Containers include the application and all of its dependencies, but share the kernel with other containers. They run as an isolated process in userspace on the host operating system.
From docker.com

How is Docker useful?

Dockerfiles contain instructions for building an image. You can link Dockerfiles on GitHub to Dockerhub to trigger auto-builds.
You can find some examples in my Dockerfile repository on github

2. Containerize an analysis as a deployable application

3. Maintain a personal/team R container to work from anywhere

dockrpack.sh (outside the container)
Now you can run R CMD check and BiocCheck in a container with all requirements, in a single command.

Package up your application to make distribution easy
Add an ENTRYPOINT to configure a container as an executable. Any additional command-line arguments to `docker run` are passed to the ENTRYPOINT executable, like so: We're running a bioconductor package in a portable, version controlled, and self-contained environment (!)

Switch your R production environment to a container
There are two ways to do this:
1. Use a Dockerfile
Rebuild container with each Dockerfile update.
2. Commit changes github-style
Push interactive changes to DockerHub.

Both require your production compute environment to allow running docker

Now, from inside R on in the container:
Thanks for listening!